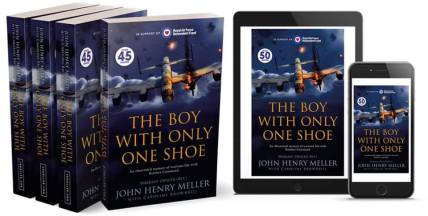 The Boy With Only One Shoe

This new book, by former XV and 149 Squadrons Wireless Operator, John Henry Meller, should make a very interesting read. John survived the closing months of the year with these two squadrons and continued his service with 35 Squadron. Finally being de-mobbed in 1950 when he joined the Metropolitan Police. (But that's another story, currently being written by John and Caroline).

John Henry Meller, 95-year-old veteran of XV and 149 Squadron has just published his memoirs of his experiences in Lancaster Bombers during the war. The book covers his early life in growing up in Warrington in the 1920s through to his eventual service in Bomber Command as a wireless operator from RAF Methwold and then RAF Mildenhall. John really takes you with him on this journey from childhood to going into combat in a Lancaster. His crew had several close calls but were one of the few lucky ones to survive.

A particularly poignant account for those whose relatives served but didn't return - this book is a chance to walk in their shoes. An important reminder of why World War 2 remains one of the pivotal points in our history. These accounts need to be written but more importantly read - lest we forget.

Available on Amazon as a paper back or Kindle in support of the RAF Benevolent Fund. For more information see: JHMeller.com

A must read for anyone who wants to experience what it was like to be Bomber Command aircrew during World War 2; from their training through to going into combat in a Lancaster Bomber. John describes beautifully what it was like living through those wartime years, waking up on an operational base in 1945. You really feel like you are there with him. The empty beds, empty chairs and empty tables of colleagues who did not return and their abandoned cars and bikes in the car park.

This book was very difficult for John to write as it brings back memories long suppressed - but for the sake of the 55,573 young men who lost their lives in Bomber Command he wanted to record their story. This book needed to be written, but more importantly it needs to be read - lest we forget! 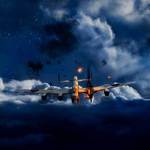 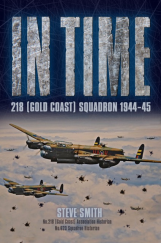 This book covers 218 Squadrons last 16 months of the war while flying Stirlings and the Lancaster. Good coverage of the development and operational use of GH. 400 odd pages, 200 odd photographs. £18 in paperback from the Amazon link below. 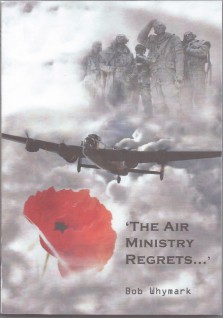 orders by contacting this e-mail: robertwhymark326@gmail.com 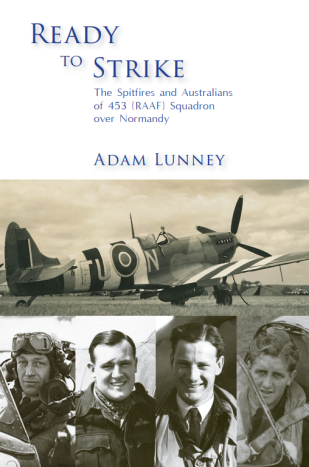 With the 75 Anniversary of the D-Day landings, I thought this might be an appropriate book to bring to your attention. Although not bomber related, this interesting and informative book tells the story of an Australian fighter squadron which had served in the UK, that was sent to France immediately after the D-Day invasion as forward air support to the advancing troops.

Ready to Strike is the story of the only Royal Australian Air Force squadron to operate from airfields built immediately behind the front lines of the Normandy battlefield after the landings in France of June 1944.

453 (RAAF) Squadron was a ‘for war only’ formation. Ready to Strike covers the period from the Squadron’s formation in May 1941 to the end of the Normandy campaign in August 1944.

This group of men were bonded by war and their love of flying. There are moments of excitement, pain, suffering, fear, boredom and laughter.

The experiences and operations of the squadron are presented in detail, using many quotes from the pilots and data from their logbooks. The book is fully referenced with chapter end notes and a bibliography.

The Australians were in Normandy too - this is their story.

Highly Commended in the Literature Division of the 2018 RAAF Heritage Awards. 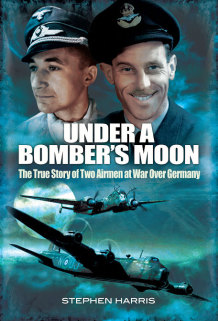 Under a Bomber's Moon

Under a Bomber’s Moon is the true story of a New Zealand navigator-bomb aimer with the Royal Air Force and a German night fighter pilot as they fight for success and survival over night time Germany during the bitterest years of the Second World War. In early 1944, after completing one tour of operations and winning the Distinguished Flying Cross for his exploits, the New Zealander, Colwyn Jones, was killed during a raid on Berlin.

The website for the book is:  www.underabombersmoon.com. The book also tells many stories about operational life in 149 Squadron, much of this through the eyes and words of my great uncle, F/Lt Frank Colwyn Jones DFC, who was killed in action in February 1944, then flying his second tour, with 7 Path Finder Force Squadron out of Oakington.

The book itself is available in the UK from Pen and Sword. 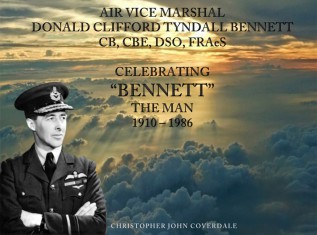 Bennett was a pioneer of civil aviation and navigation and at age 31 would become the youngest Group Commander in the history of the Royal Air Force. With his unique flying and navigational skills, Bennett Commanded 8 Group Path Finder Force, Bomber Command during 1942-1945, leading them and Bomber Command to victory.

Bennett was an outstanding ambassador for King and Country, rarely equalled within the aviation and navigational world. The book covers Bennetts incredible career in photos and views from Bennett and those close to him. His private and personal accounts on life and his career path which he reveals the setbacks and the life-changing events that made him a legend. The book allows us to understand the thoughts and feelings of a fantastic leader.

See email below from the author:

Sadly the book is only sold via blurb.co.uk

If someone wants to purchase from me I would sign the book for free but they would need to email me at coverdalec@virginmedia.com

Every Order would need to be on a pre-order bases payment via PayPal so that there is a record and a guarantee with regards money changing hands.

Orders take Ten days as the books are produced to order and made in Holland by Blurb.

If you need any other info please let me know.

'SAM' MARSHALL OF THE ROYAL AIR FORCE, THE LORD ELWORTHY

Martyn Ford-Jones has been cooperating with Richard Mead in the production of this biography of 'Sam' Marshall of the RAF, The Lord Elworthy. He advises it is now on sale.

If you follow the link below you'll see a book is being published about 75(NZ) Squadron at any time now:

Please click on the file below to read the publishers press release about this new book by Martyn Ford-Jones. The launch is not yet confirmed, but he is am hoping it will be launched at Aces High Aviation Gallery, Wendover, near RAF Halton, Bucks, on a date to be confirmed, likely to be around 2nd March 2019.

FROM ST VITH TO VICTORY

Our 218 (Gold Coast) Squadron Historian, Steve Smith, has published a book called “From St Vith to Victory” about the Squadron’s campaign against Nazi Germany.

Steve was also kind enough to give the 'Register' a plug on the dust cover! The book was published in April 2015 and is available from Amazon. 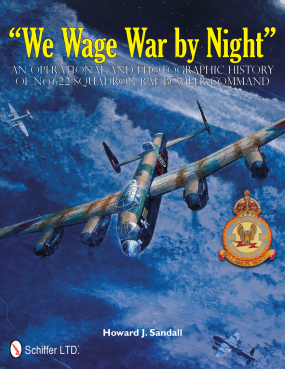 WE WAGE WAR BY NIGHT by Howard J Sandall

This is an operational and photographic history of 622 Squadron Bomber Command by our 622 Squadron Historian, Howard Sandall. It is available from Gazelle Book Services on:

https://www.gazellebookservices.co.uk/GazelleBooks/sresult.pgm. It is also available from Amazon. The ISBN number is 9780764338144. 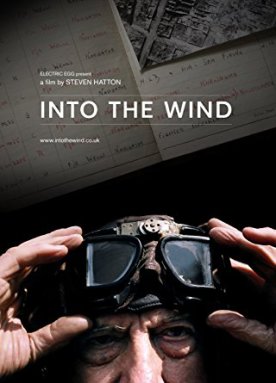 Our 622 Squadron Historian has drawn our attention to this documentary called "Into the Wind". It is a feature length documentary film about the life and experiences of wartime Bomber Command crews. Two 622 Squadron veterans are amongst those featured; Des Andrewes and Bunny Burrows. More details are available from the website: http://www.intothewind.co.uk/. It is available from Amazon.

MY WAR by Derek Bigg DFC

Derek died in 2013 but has left us his memories in his book "My War". Our reviewer says: "It is an excellent read, being witty, descriptive and informative throughout. I would highly recommend it." It is published in paperback and being sold by: - 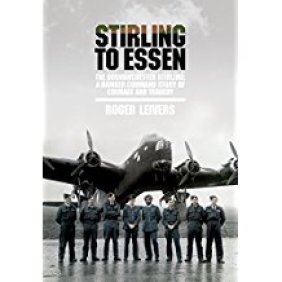 STIRLING TO ESSEN by Roger Leivers

In the file below is a description of this book which is available from Amazon. 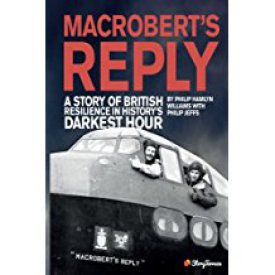 This is the true story of a widow making a donation to the RAF following the death of her three sons at the outbreak of WW2. Lady MacRobert requested that the money be used to buy a bomber as her way to reply to the Nazi regime. It was to be named 'MacRobert's Reply' and it would become perhaps the most famous Short Stirling bomber of the war. The story follows the commissioning of the bomber and the allocation of its crew, and through various missions until it was shot down in May 1942 in Denmark. However the story then picks up the sole survivor, and his own miraculous survival and assistance by the Danish resistance movement, his capture by the Germans, and his arduous incarceration in Stalag VIIIB leading to his participation in the famous 'Long March' of POW's ahead of the advancing Russian red army. 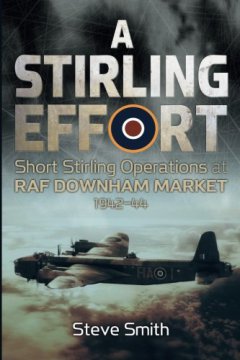 A STIRLING EFFORT by Steve Smith

Steve has had a book published on RAF Downham Market, titled A STIRLING EFFORT 1942-1944. It records the Stirling operations of 218(Gold Coast), 623 and 90 Squadron. The book is available from Amazon. 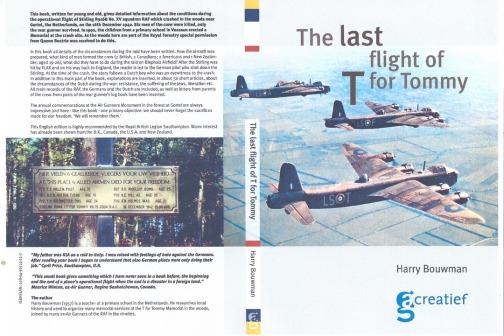 THE LAST FLIGHT OF T FOR TOMMY by Harry Bouwman

‘The last flight of T for Tommy’ tells in detail the story of Stirling R9168 No. XV sqdn RAF which crashed in The Netherlands on the 16th December 1942. All viewpoints – the allied side, the Germain side and the Dutch side – are woven together to create a more complete picture.

The book is available from the web shop of the International Bomber Command Centre:  http://internationalbcc.co.uk/shop/the-last-flight-of-t-for-tommy/

Click on the pdf below to read some reviews of the book.

WOULD NOT STEP BACK by Hilary Pedersen & Associated Writers

The true story of a reluctant Kiwi hero. Thrilled to announce that you can now visit www.phillamason.com to purchase your copy of "I Would Not Step Back..." ... available both in Hard Copy and Ebook formats.

The Dannevirke (in New Zealand) launch of the book will take place on the evening of Thursday, 8 February at the Dannevirke Services and Citizens Club. Attendance at this function is by invitation only.

Local sales opportunities for the Hard Covered book will happen on 9 February, 10am - 12noon at the Dannevirke Information Centre on High Street, and again at that same time and venue on Friday 16 February . 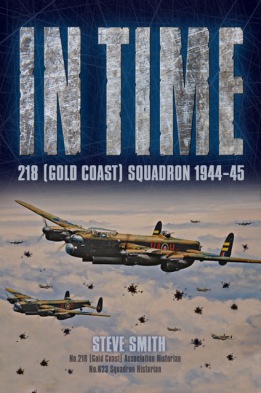 IN TIME by Steve Smith

Steve's new book will be published towards the end of June early July 2018. The Publisher is: Mention The War Publications.

Money raised from sales of the book will be going towards a memorial at Downham Market.